This article appeared in the August, 2014 issue of the Canadian Arabian Horse News as “Canadian Endurance Team Sets Sights on Normandy and the World Equestrian Games.” 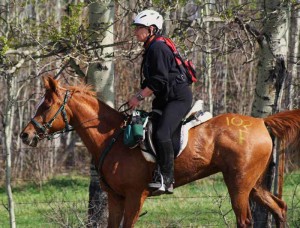 In the show horse world, the versatile Arabian is represented in nearly every discipline and class in the show ring, and National Championships are recognized as the highest honor one can achieve. But in the sport of endurance racing, where Arabian horses dominate, the ultimate honor is to compete in the World Equestrian Games (WEG).

Celebrated every four years and alternating with the Olympics, the World Equestrian Games are the biggest equestrian event in the world. This year’s event will be held in Normandy, France, from August 23 – September 7 as the finest athletes from 76 nations compete against each other in the eight official Fédération Equestre Internationale disciplines of jumping, dressage, eventing, driving, reining, vaulting, endurance and para-dressage.

The Endurance competition will take place on Thursday, August 28 on a 160 km course through the French countryside, with a record 260 riders competing. The race will consist of six loops and a must-see will be the loop that runs along the stunningly beautiful Bay of Mont Saint Michel.

“All of us at Endurance Canada are extremely excited about the stellar team we are sending to 2014 WEG! These riders have all worked hard to achieve this goal without ever losing sight of our primary value of protecting the welfare of our equine companions. We know that they will do an excellent job of representing Canada on the International scene, and we wish them every possible success.”

Endurance riders are tested in their ability to set a pace against the clock, taking into consideration their horse’s fitness and ability as well as the weather, terrain and footing. In a race of this caliber, the crew plays a huge part in the success of the rider and the team. Canada’s riders will be assisted by an army of support persons necessary in all aspects of the event – moving gear, looking after the horses, attending meetings and opening and closing ceremonies, and looking after the rider. It has been said that races can be lost “on the ground” which speaks to the the importance of the team crews.

“We have an excellent team of athletes, grooms and team officials who have been working very hard to prepare for the big day on August 28th,” notes Chef d’Equip Maura Leahy. “All the athletes and horses will be in France by August 20th, which will give us eight days for our final preparations. We are anticipating great results from all of our Athletes and horse combinations, both as individuals and as a team.”

This trip has been a long time in the making. The horses have been on the competition trail, travelling to local rides, into different provinces and into the US for several years to qualify and to keep the horses fit and peaking. We are looking forward to representing Canada, and doing well for our country.